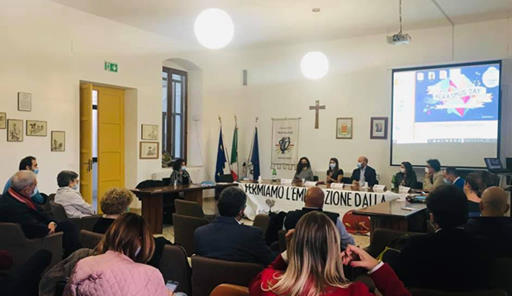 Alessandro Russell (IDRISI Cultura e Sviluppo) brought to the attention of the audience the context analysis that led to the formulation of project BUCOLICO, aiming to create an educational model enhancing digital and self-entrepreneurial skills among young adults (15-29 years) in rural contexts of 5 countries (Italy, Spain, Poland, Belgium, Greece) as a measure to contain the migratory phenomenon and further depletion of human capital in geographically peripheral areas.

Several members of the public brought to the debate elements of discussion on the theme of business culture and the need to bridge the gap between young people and local resources through appropriate training interventions.

Luciano Marino (mayor of the Municipality of Lercara Friddi) closed the session by sharing some considerations on the challenges posed to the local and regional socio-economic fabric by negative demographics, declining birth rates and emigration and brought to the attention of the public the opportunities offered by the Italian National Strategy for Internal Areas.

This project has been funded with support from the European Commission. This web site and its contents reflects the views only of the authors, and the Commission cannot be held responsible for any use which may be made of the information contained therein.